The United Way of the Bradford Area has announced that 75% of the $330,000 goal has been raised to date.

“As we close in on this deadline, we encourage our friends and neighbors to consider their annual gift to the United Way so that the many agencies which benefit (from the campaign) can be fully operational without having to cut any programs or services,” said Lisa Boser-Miller, campaign co-chair.

Although Sunday is the last day to make first-time asks, officials say that follow-up efforts will take place from now until January 5, 2014.  Executive Director Mandi Wilton Davis said that next week will be consumed with making contacts with those individuals or businesses who have given in the past, but from whom a pledge has yet to be secured.

“We truly need the entire community’s support to reach the goal,” added Mary Boser, co-chair.  “It’s imperative that you invest in your fellow neighbor, especially during the holiday season.”

“Our staff and volunteers are working tirelessly to ensure a successful campaign,” said UWBA Board President, Steve Williams.  “To those who have already given, thank you!”

The staff and Board of Directors of the United Way of the Bradford Area have a great deal to be thankful for this year, especially the current successes of the 2013 campaign, “Life Is Good When You’re UNITED,” which is at 65% of goal.

“I had set a personal goal of being at 50% by Thanksgiving,” said Executive Director Mandi Wilton Davis.  “I knew that it was attainable, and I’m so grateful to everyone whose annual contributions are being accounted for in this update.  Thanks for Giving!”

Davis cautions the community that, although they are pleased with the progress thus far, there is still a ways to go to achieve the $330,000 goal.

“We have to stress that we still are going to rely heavily on our community at-large to get us through the next few week,” said Davis.  “We have just a couple more workplace presentations to do, then it will be following up with outstanding donors.

“Next week, I will be notifying the agencies who have applied for funding what their allocation potentially will be, based on attaining that $330,000 goal.  If that is not reached, then the agencies’ allocations will have to be cut, which will obviously negatively affect the programming and services necessary in our community.”

The United Way will stop with any first-time solicitations on December 15th, but will take until January 5, 2014 finalize all of the efforts, if necessary.

“We have a great team who has put a lot of energy and passion into this year’s campaign, and I am so appreciative that they’ve offered their time and talents to the UWBA,” said Davis.

The United Way of the Bradford Area has awarded more than $7,000 to six local organizations through community innovations grant funding for the fourth quarter of 2013.

Local non-profit, 501(c)3, health and human service agencies may submit a request for up to $1,500 per quarter.  The category supports programs independent of those benefitting from monthly allocations that have the potential to impact the local community, encouraging innovative approaches to meeting health and human service needs, and produce specific and measurable outcomes.

Community Innovations grant applications are due on a quarterly basis, and are part of three categories of funding from the annual United Way campaign. For more questions about United Way, or to make a contribution to the 2013-2014 campaign, visit www.uwbanews.org or call 814-368-6181.

The United Way of the Bradford Area is currently accepting Request for Proposals (RFP) for the 2014 calendar year. Local 501(c)3 health and human service organizations which would like to receive funding can submit an RFP by by 4:00 pm on Friday, September 20, 2013.

All applications are reviewed by committees comprised of United Way Board members, with recommendations being presented to the full board for final approval.

A sure sign of the summer winding down is the kick-off of the United Way of the Bradford Area’s annual fundraising campaign, which officially begins today.

“We are so pleased to announce the official start of this year’s appeal, ‘Life Is Good When You’re United’,” said Executive Director Mandi Wilton Davis. “We, as an organization, are so fortunate to be as successful as we are, which is attributed to the generosity of our local community.”

“To be able to say today, the public start of the campaign that we’re at 10% of goal is exciting,” said Davis. “I’m so optimistic about what the next four months will bring!”

The United Way campaign runs from August through December and has a goal of securing pledges from the community through workplace campaigns and individual contributions that benefit the local United Way’s 18 affiliated agencies and 32 programs.

This year’s promotional theme was decided on through a contest held in May for local 3rd, 4th, 5th and 6th grade students. Participating classes submitted their choice for a theme, along with their reasoning for choosing it.

“The students did a great job with their campaign theme submissions for this year and, as a board, they made it a very difficult decision for us.” said Steve Williams, UWBA Board President. “We were presented with several fantastic options, but ultimately chose Mrs. Johnson’s (3rd grade at School Street Elementary) entry.

“What was so great about this ‘competition’ was that we got to hear what some of the area’s students think of or know about the United Way. One of our goals was to have a presence amongst our local youth, and we succeeded with this opportunity – but there’ll be many more,” said Williams.

The students said, “We believe that when everyone in the community works hard together, it makes everyone’s lives in Bradford good. It also strengthens our community!”

The community is encouraged to help celebrate this year’s campaign at the 15th annual pig roast/clam bake, presented by Northwest Savings Bank, which is scheduled for September 5th at the West Branch Community Center. Tickets are $30 per person, and include a buffet dinner, desserts and beverages. A cash bar, 50/50 tickets and raffles are also available. Additional sponsorship has been provided by Tops Supermarket, Penn Laurel Realty and Glenwood Beer Distributors. Proceeds from the event benefit the United Way. Those wishing to attend can reserve their tickets online at www.uwbanews.org or by calling the office.

“I hope our community is as excited as I am about this year’s campaign,” said Davis. “I know that everyone will agree that when the United Way succeeds, we all benefit – whether it’s as a recipient of a funded service, as a donor who knows they’ve made an impact, or as a local resident who can boast about how strong our community really is.” 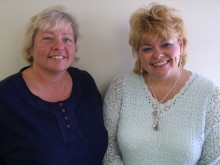 As the UWBA has marked the start of the fundraising efforts for the 2013 campaign, this year’s co-chairs – Lisa Boser-Miller and Mary Boser – are ready and waiting to get started!

“What an honor to even be thought of as someone who could lead this organization’s campaign,” said Lisa. “We are proud that the United Way staff and Board felt strongly about our abilities and commitment to our community that they would offer us this responsibility.”

The two ladies are no strangers to the United Way. Mary currently is finishing her final month of her term as a member of the Board of Directors, having served for the past eight years. Lisa previously served as a board member for four years, and has since been heavily involved with special events and corporate solicitations.

“I think this is a great way for me, personally, to finish up my Board tenure,” said Mary. “This organization will always be close to me, whether I’m on the board, co-chairing a campaign, or being a donor.

“When Lisa called me to discuss this opportunity, her enthusiasm radiated right through the phone. We have shared so much throughout our lives – including the love of sports, crafts, traveling, and even hearts embedded with the desire to give back to others. I can think of no one other than my sister with whom I would rather chair such an important campaign.”

“I cannot wait to have these two ladies at my side for the next four months,” said Executive Director Mandi Wilton Davis. “On a personal level, they both have offered a great deal of guidance to me, and I’m elated to be able to learn from them even more.”

The Boser Sisters will be an immediate “face” for this year’s appeal, “Life Is Good When You’re United”, and will also be division leaders for the corporate, corporate employee and mail solicitations.

“It’s always been an innate, unspoken requirement to give back to our community,” said Lisa. “What better way to do so than through the United Way?”

Mary echoed those remarks, adding, “We fully expect to raise the $330,000 – and beyond – since we have learned through the years that so many in the Bradford community, which we are proud to call home, share our pride.

Mary, an Assistant Professor of Nursing at the University of Pittsburgh at Bradford, currently lives in Bradford. Lisa serves as the Manager of the Case Collectors Club for W.R. Case & Sons Cutlery Company and also resides in Bradford with her husband Phil.

A few short minutes ago a woman came into my office looking for help with transporting items from a relative’s home to a deserving agency.  She was concerned with the amount of things they had cleaned from the home, and with how, where and when to get as many of the items into deserving hands as possible.  After making a couple of quick phone calls, the woman spoke with one of our local agencies, and her problems were solved.  After she thanked me for my referral and the use of my phone, she left my office saying, “You’ve done your good deed for the day.”

So, a couple of things come to mind.  First, I’m happy to promote the UWBA as more than a fundraising organization (although that is our primary function).  We are here to assist – to the best of our abilities – anyone in need.  Whether it’s referrals, the use of a telephone, or a band-aid if you’ve fallen off your bike, we’re proud to be able to serve our community – our neighbors – any way we can.

The second thing that came to mind was the notion of doing a good deed.  How many times do we, as community members, do a good deed for someone?  What do you consider a good deed?  Should we be cognizant of the fact that we have done something nice for someone, or does that take away from the idea of “just doing it because it was needed?”